Over the past four years the immensely talented but equally temperamental Runnin’toluvya has taken owner-trainer Tim Grams on a rollercoaster ride.

He’s posted a 10-race win streak, including from victories in the Grade II Charles Town Classic and West Virginia Breeders’ Classic. But he’s also had deflating lows, like a pair of fairly disastrous WVBC outings when he finished up the track at odds-on.

But although Runnin’toluvya has not raced in nearly 18 months, Grams insists that the roller coaster ride is far from over. Runnin’toluva has worked three times for his expected return in the $75,000 Confucius Say Stakes on April 23, a pair of half-mile moves the last two Saturdays building on a three-furlong breeze March 18. In his most recent work, Runnin’ toluvya went the half in 49 ⅕ seconds, 11th best of 35 at the distance.

“He’s doing really good,” Grams said of Runnin’toluvya, an eight-year-old Fiber Sonde gelding who boasts 15 wins and over $1 million from 26 career outings for Grams. “He did it so easily I thought it was a slower work. But he’s getting a little better with each work and I am planning to work him two more times [April 9 and 16] before the stakes. He’s been away a while, but he’s doing really good.”

Runnin’toluvya captured both the $300,000 West Virginia Breeders’ Classic and the Grade 2, $1 million Charles Town Classic during a 10-race win streak bridging 2018 and 2019. His emphatic victory in the 2018 Breeders’ Classic, which came on the heels of a powerful score in the Frank Gall Memorial, certainly came as no surprise. He was even money on WVBC night.

But his victory in the Grade 2 Charles Town Classic six months later against open horses with expensive pedigrees and Hall of Fame connections was a genuinely surreal moment for Grams and longtime local racing fans.

“I just hope when I wake up on Sunday morning that this day was not a dream,” Grams said in the aftermath of his charge’s 9-1 upset.

Following a full year in which he was virtually invincible at Charles Town, Runnin’toluvya veered in the opposite direction over the next year. A loss in the G3 Iselin at Monmouth Park snapped his winning streak and was the first of five defeats in six outings for the gray gelding. 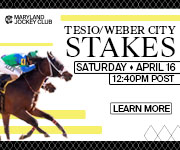 The last of those defeats was a solid third in his title defense in the Charles Town Classic, captured in 2020 by Sleepy Eyes Todd. And he followed that with a win in the Frank Gall Memorial, sparking hopes that the old Runnin’toluvya was back.

But, though sent off at 2-5 in the West Virginia Breeders’ Classic, Runnin’toluvya could not duplicate his form of old, sixth finishing. After one more disappointing outing, Grams gave the best horse he’s trained a break.

He spent some time on Grams’s farm in nearby Ranson. But Grams said he did not give any thought to retiring the now-eight-year-old.

“You know, I never thought about stopping with him altogether,” Grams said. “He never got sick and we never found anything physically wrong with him. He’s always been a little headstrong like a lot of the Fiber Sondes, but he’s always been sound. When I started back with him [wife] Judy [Grams] got on him a few times in the morning and said everything was okay. When we started to work him he started getting into his normal routine, and he’s just as good as he ever was.”

Headstrong, yes, and a horse who likes things his own way.

“You know, he goes out about nine in the morning after the break [8:30-9] and he’s one of the first ones on the track, and there is usually a good crowd of horsemen who stand along the fence to watch him work,” Grams said. “He can still be a handful some days, but he’s calmed down a little bit over the last year or so, and he’s all business once he steps on the track in the morning.”

Grams has already begun scouting his potential competition for the April 23 Confucius Say and then mapping out the rest of his campaign. The Charles Town Classic in late August is not on the agenda, the trainer said, but if his horse comes back the way he hopes, the usual array of West Virginia-bred stakes including the Frank Gall Memorial, West Virginia Breeders’ Classic, and Randy Funkhouser Memorial [formerly the A Huevo] are high on his target list for 2022.

One horse not likely to post for the Confucius Say is Muad’dib. The Jeff Runco trainee is a perfect 9-for-9 in his career and won last year’s Breeders’ Classic. But he has not been on the work tab since winning the A Huevo Nov. 6.

“I think there are going to be some good ones in there,” Grams said. “Fiber And Emily and No Change are both really good right now, and I know Jeff [Runco] will have either Penguin Power or Opera Nite ready, if not both of them. If my horse is right he’s going to be tough in there, but after that we’ll play it by ear. I’m not going to ship anywhere. I’ll wait for the West Virginia-bred races and hope he’s good in the fall.”