From the Santa Anita Media Team:

Barraza might act the clown around the barn but he’s all business on the track, where he’s won his last three races and seeks his first black type triumph next Sunday in the Grade III San Simeon Stakes for four-year-olds and up at 6 ½ furlongs down the hillside turf course.

“He’s doing really well,” said Vladimir Cerin, who conditions the Into Mischief colt for longtime clients Holly and David Wilson. “He’s happy and kind of like a young puppy.”

Claimed last April 11 for $100,000 from Bob Baffert and Spendthrift Farm LLC who bred the bay colt, Barraza won the restricted Clockers’ Corner Jan. 22 by 2 ¼ lengths leading throughout, prior to capturing two overnight turf sprints coming from well off the pace.

Whatever running style he employs, Barraza is enjoying life.

“Everything is playful to him,” Cerin said. “It’s like he’s really not in the racehorse business; he’s in the ‘having fun’ business.” 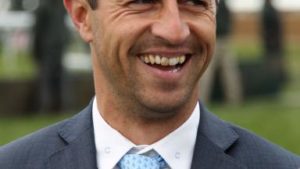 The three victories gave him 13 for the meet and moved him into fourth place among Santa Anita’s trainers.

Baltas ran one-two in the fifth race with Miss Costa Rica and She’s Devoted noses apart for a $31.60 exacta, first and second in the seventh with Sterling Crest and Carroll Girl for an $8.20 exacta, and capped his day with a victory by Cover Me Up in the eighth at a $10.60 payoff.

But three wins in one day was not a personal best for the 60-year-old native of Gary, Indiana.

“I won four in one day once at Del Mar, and three in one day many times,” Baltas said. “But I never ran first and second twice in the same day.”

Baltas has two horses nominated to next Sunday’s Grade III San Simeon Stakes for four-year-olds and up at about 6 ½ furlongs on the hillside turf course and plans to enter one but was undecided whether it would be Vanzzy or Whisper Not.

“I don’t know which one, but I think one of them will run,” Baltas said. “The race could come up tough.”

There were 18 nominations to the $100,000 event. Vanzzy was a troubled fifth in the restricted Clockers’ Corner on Jan. 22, his first race in four months, while the English-bred Whisper Not was seventh, beaten only 3 ½ lengths despite going wide in the Grade II Eddie D. Stakes last Oct. 1. 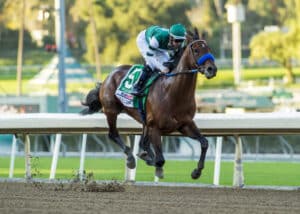 FLIGHTLINE OUT WITH ‘SETBACK’ BUT ‘HE’LL BE FINE’

“There’s soreness in his right hock (a large joint just above the shin bone in the rear legs),” the trainer said. “We’ve done diagnostics and will do more, and X-rays are negative.”

Flightline, a $1 million son of Tapit, captured the Grade I Runhappy Malibu Stakes by 11 ½ lengths last Dec. 26. Prior to that victory, the bay colt won his first two starts by a combined margin of 26 lengths, to the delight of the racing world whose anticipation of his future races held boundless excitement.

“People are coming up to me and offering their tribute,” he said with a sense of both appreciation and understanding, “but it’s not like he’s going to die.

“There’s no time frame on when he’ll return to the track, but he’ll be fine. He just had a setback.”

FINISH LINES: Santa Anita-based Edwin Maldonado and Abel Cedillo had worthwhile trips to Golden Gate Fields Saturday, the former piloting Blackadder to a neck victory for Bob Baffert in the El Camino Real Derby and the latter finishing second on 3-10 favorite Mackinnon for Doug O’Neill in the field of 11 three-year-olds . . . Among the 176 recorded workouts this morning were three by Baffert stakes winners: As Time Goes By, four furlongs in 48.40; and Cezanne and Pinehurst, each five furlongs in a bullet 59.20 . . . There is a special holiday racing next Monday, Feb. 21, Presidents’ Day, with two $100,000 races featured, the Tiznow Stakes and the Spring Fever Stakes. It will also be Dollar Beer and Soda Day, with hot dogs available for $2. Santa Anita will be dark for live racing Monday through Thursday. Live racing resumes 12:30 pm Friday, Feb. 18 and continues through Monday, Feb. 21.