Stretching across Mongolia and China’s northwest is the fastest growing desert on Earth. It’s already 1.2 million square kilometers in size, but each year the Gobi Desert adds around another 6,000 to that number.

As it expands, it devours grasslands, swallows whole villages and turns vast swathes of fertile land into an uninhabitable wasteland. Tens of thousands of people have already been forced to relocate, and only a few thousand can still live in the region.

Desertification — the process whereby previously fertile soil degrades into a desert — can be caused by natural processes. But humans play a determining role in its rapid spread.

There are four main reasons for deteriorating soils worldwide: Excessive water usage in industrial agriculture, more frequent and severe droughts, deforestation, and the overgrazing of grassland from livestock.

Previously fertile and lush landscapes are turning into hostile, sandy regions that threaten the livelihoods of around one billion people worldwide, as well as the survival of millions of species. Projections suggest that by the middle of this century, a quarter of all soil on Earth will be impacted by desertification.

It’s a grim outlook. But the good news is that it can be reversed.

Harnessing torrential rain in the desert

One promising solution is found near Mecca. It’s called the Al Baydha project. There, experts in desert agriculture have developed a system to bring desolate soils back to life with the help of torrential rain.

When it rains in Saudi Arabia, a huge amount of water often falls in a short space of time — as was the case in April 2021 when entire cities were briefly flooded. But it’s difficult for soils to store water when it comes all at once.

“We thought, if we could get that water into the ground, it could be a sustainable source of water, even if it doesn’t rain for 20 months,” said Neil Spackman, an expert in regenerative agriculture and former director of the Al Baydha Project.

Together with villagers living in the area, the agricultural experts built dams and terraces along the rock walls that border the valley in western Saudi Arabia, along with kilometer-long ditches. Now when it rains, the water collects and is directed to where it is needed and where it can slowly seep into the ground. This style of irrigation works all over the world and was used by the Incas in South America centuries ago.

Even the Incas used terrace farming to improve irrigation

Experts initially used artificial irrigation to kickstart this natural cycle in Saudi Arabia. But the trick was that significantly more water was put into the soil than was taken out. Where there was once just sand and stone, native trees, shrubs and grasses started to grow again — even surviving a 30-month long drought without irrigation.

How renewable energies make it rain

Not far away from Saudi Arabia, countries in North Africa are experimenting with technology to prevent desertification taking over, too.

At more than nine million square kilometers, the Sahara is the largest desert on Earth, and like the Gobi, it continues to grow — in some areas almost 50 kilometers every year. The regions that surround the Sahara are arid, but alive — though perhaps not for long, as human destruction of fertile soils means they are more threatened by desertification than anywhere else in the world. Poverty, water shortages and land ownership conflicts are all made worse by the constant threat of environmental degradation.

That’s where solar panels and wind farms come in — these are another potential solution to stopping the desert from taking over.

How? By making it rain.

It works like this: The black surface of the solar panels heats the air, which then rises higher into the atmosphere. Likewise, the rotation of thousands of wind turbines pushes the air upwards. “When these air masses reach higher altitudes, they are cool […] So it’s colder and the moisture condenses, becomes rain and falls down,” says Safa Mote, a physicist at the University of Maryland and co-author of a study on the topic. 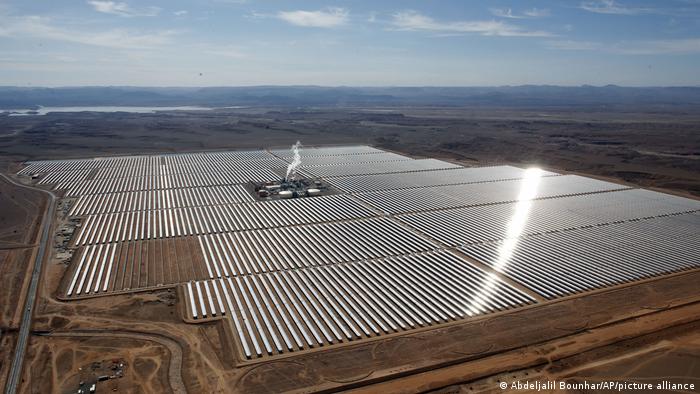 Huge solar and wind farms in the Sahara could improve rainfall

Experts estimate that if one fifth of the Sahara Desert was used for solar and wind farms, it would generate about five centimeters more rain per year in the south of the Sahara. That may not sound like much, but it could increase the region’s plant cover by 20% and boost agriculture enormously — a win-win for people and the environment.

According to Mote, a solar and wind farm of that size could produce four times as much electricity in a single year as is consumed worldwide today. That could help African countries become more sustainable. If there is the political will to get behind the project, the physicist is convinced that the gigantic implementation costs of an estimated $20 trillion (€17.5 trillion) would be manageable.

Another, nature-based way of making the desert fertile again is being tested in China. And it’s already seen success.

In 1988, people started planting trees in the Kubuqi Desert northwest of Beijing to protect the transport routes of a salt mine. Over the past decades, this has developed into one of the most successful reforestation programs in the world. 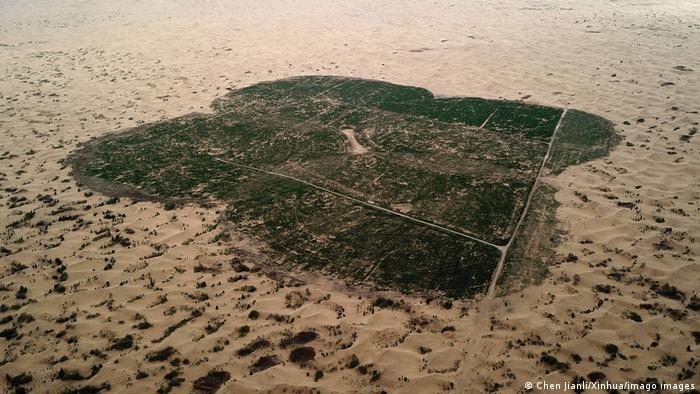 Afforestation of the Kubuqi Desert has helped reduce sandstorms in Beijing

Rather than just planting trees in the usual fashion, special water jets were developed to plant the trees in the sand dunes. These jets drill holes in the sand and simultaneously water the young cuttings. “This has reduced the planting time from ten minutes to ten seconds, a very efficient and important method,” says Barron Joseph Orr, Lead Scientist for the United Nations Convention to Combat Desertification.

In Kubuqi, farmers also put straw rolls on the dunes to protect young plants from the wind.

The new grasslands now serve as grazing and cultivation areas for farmers, who grow liquorice and other herbs that fare well in arid climates and are in high demand for traditional Chinese medicine.

The greening of the Kubuqi Desert has even had positive impacts as far away as Beijing — some 800 kilometers from the desert — where air pollution from sandstorms has since decreased significantly.

So, can the right technology fix desertification?

It is possible to revive degraded soils and vegetation, and to restore disrupted water cycles — be it with nature-based methods or using high-tech strategies.

But the costs and effort involved are too high to transform all the world’s desertified areas back into healthy soils.

Experts say the only way to prevent fertile soils from drying out and deserts from spreading is to stop the relentless exploitation of soils and overuse of finite water sources.