Brazil has become the world’s leading exporter of beef in recent years. It has more cattle than its 214 million human inhabitants. But this leads to serious environmental damage: deforestation of the Amazon rainforest, as cattle drive the illegal appropriation and possession of deforested public lands. CREDIT: Mario Osava/IPS

RIO DE JANEIRO, Feb 14 2022 (IPS) – With its accelerated growth agriculture has emerged as a key sector of Brazil’s economy, but it is failing on its own to spread prosperity and reduce poverty and inequality, with industry in decline.

However, it can do so by bringing in foreign exchange with its large exports and thus create macroeconomic conditions for pro-poor social policies, argues Carlos Guanziroli, a professor at the Flunense Federal University.

Brazil used to be a food importer, producing only about 50 million tons of grains in 1980. Thirty years later the harvest was three times bigger and in 2020 it reached more than 250 million tons, the economist noted.

The fivefold increase in the harvest in 40 years was due to a strong growth in productivity, since the sown area expanded by only 60 percent, from 40 to 64 million hectares, according to the Agriculture Ministry’s National Supply Company.

The country became the world’s largest producer and exporter of soybeans, meat, sugar, orange juice and, long before that, coffee. Agribusiness exports reached 120.6 billion dollars in 2021 and led to a sectoral surplus of 105.1 billion dollars, which is more than offset the industrial deficit. 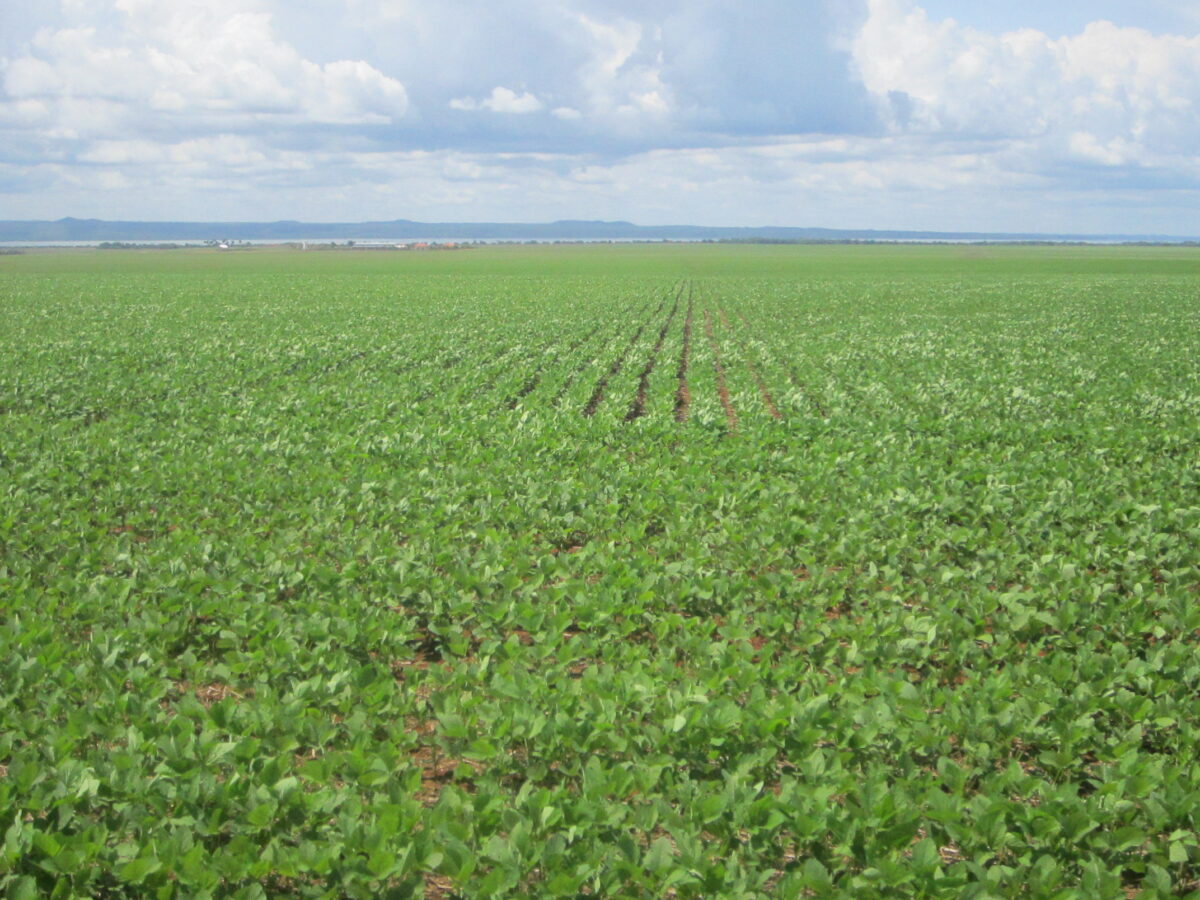 Soybean is the main symbol of the success of agribusiness in Brazil, whose landscape has been stained with its monotonous crops. In four decades, agricultural research has achieved high soy productivity in the hot lands of the Cerrado, the Brazilian savannah. Flat land suitable for mechanization, with regular rainfall and the possibility of planting corn or cotton after the soybean are the advantages of tropical agriculture in Brazil. CREDIT: Mario Osava/IPS

Brazil achieved this agricultural strength in the midst of dizzying economic, demographic and political upheavals in the country over the last 100 years.

The 20th century industrialization drive, which picked up speed after World War II and continued until the 1980s, was apparently set to give rise to a new industrial powerhouse, the “Great Brazil” announced by the 1964-1985 military dictatorship’s propaganda.

But industry stalled since the 1980s, with its share of GDP declining in the following decades, while agriculture took off.

In the 1990s, a previously neglected sector, family farming, gained a more clearly defined identity, thanks to promotion policies. Guanziroli, then a researcher at the United Nations Food and Agriculture Organization (FAO), contributed to this process.

Industrialization accelerated the urbanization of the population. Only 36 percent of Brazilians lived in cities in 1950. By 1980 the proportion had climbed to 67 percent and in 2010, when the last national census was carried out, it stood at 84 percent, according to data from the Brazilian Institute of Geography and Statistics (IBGE), which puts the current population of Brazil at 214 million.

In other words, during the following cycle of strong agricultural expansion and industrial stagnation the tendency towards urbanization was maintained. Mechanization, extensive monocultures and the high concentration of land ownership are some of the reasons for the massive rural exodus.

But agriculture involves an extensive chain, which includes manufacturers of tractors, harvesters and other machinery, chemical inputs, packaging, as well as activities such as transportation and other services, said Guanziroli.

“This chain accounts for 22 percent of GDP and 28 percent of all jobs” in Brazil, he stressed in an interview with IPS in Rio de Janeiro. 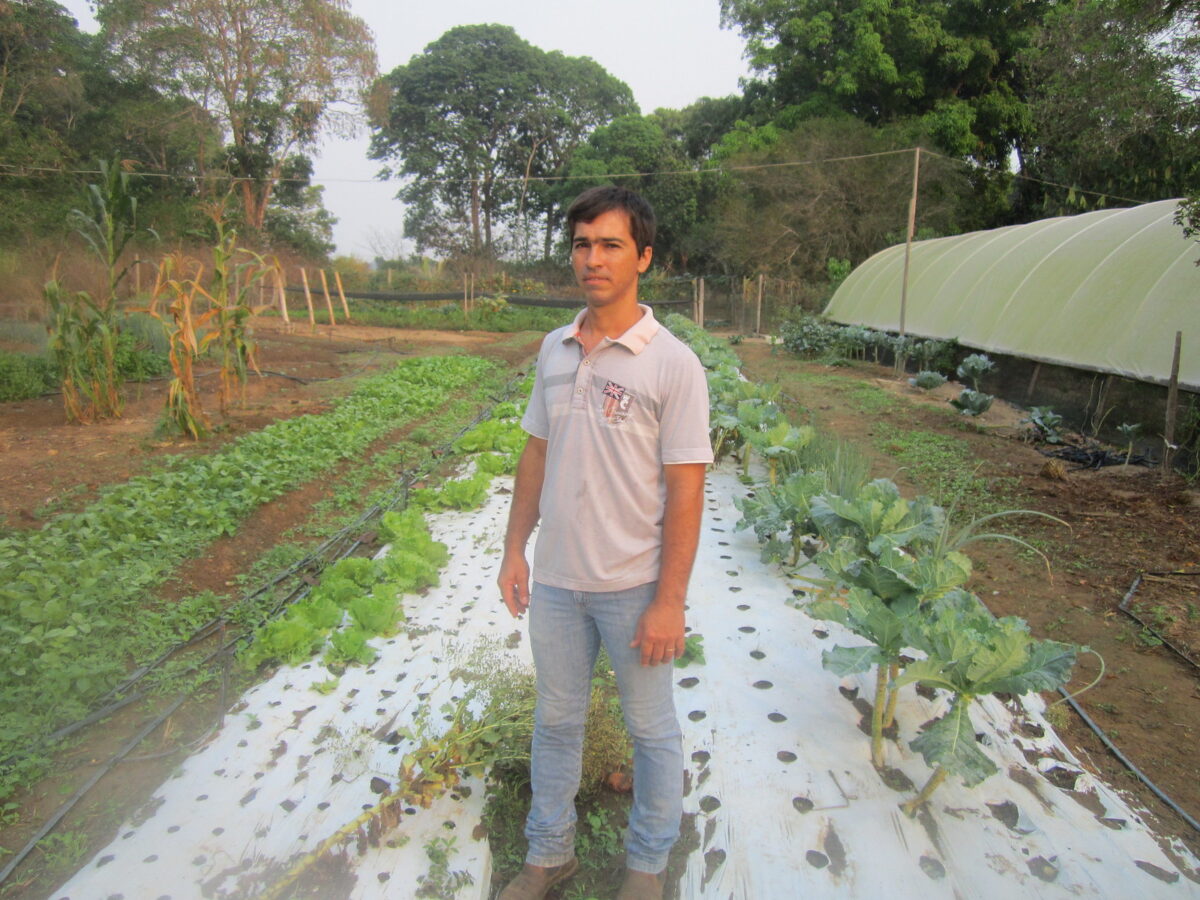 Farmer Alison Oliveira stands among his organic crops on the small farm he works with his wife near the town of Alta Floresta, on the edge of Brazil’s Amazon region. Sustainable family farming is a barrier against deforestation and soybean monoculture. CREDIT: Mario Osava/IPS

Family agriculture, which comprises 3.9 million farms with more than 10 million employed workers in Brazil, according to the 2017 agricultural census conducted by IBGE, is a sector which stands to experience major social and economic benefits from public policies.

“It is more labor-intensive and responds to trends towards local consumption and organic production, which are more evident in developed countries, especially in Europe,” said Rafael Cagnin, an economist at the Institute for Industrial Development Studies, promoted by the sector.

In addition to providing employment for families and potential employees, family farming enhances food security and boosts the local economy.

The activity is defined not by the size of the property or what it produces, but by the predominance of family labor, which must not be surpassed by hired workers, said Guanziroli.

Studies and proposals of researchers on the subject, especially in the 1990s, “sought to avoid simplifications, such as saying that family farmers were all poor and only produced food,” he said.

A misconception that is widespread – not only in Brazil – is that family farming is responsible for the production of 70 percent of the country’s food, Guanziroli said. He clarified that this is correct with regard to beans and cassava, but not to food production as a whole.

“This is a lie used for political means that affects dialogue and public policies, rhetoric that is not based on serious evidence,” he argued.

Studies estimated the share of family farms in total agricultural production at 38 percent in 1996 and 36 percent in 2006, according to IBGE census data. In 2017 the proportion dropped to 28 percent because of a prolonged drought that began in 2012 in the semi-arid Northeast region, which concentrates almost half of the country’s family farms. 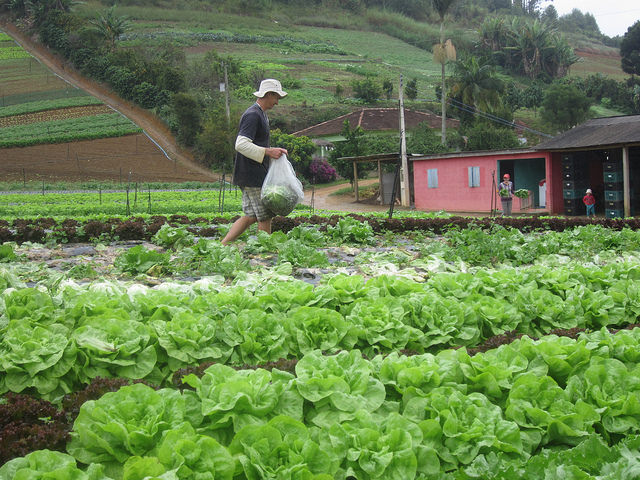 A farmer harvests lettuce in Santa Maria de Jetibá, a mountainous agricultural municipality, the main supplier of horticultural products for school meals in the city of Vitoria, in southeastern Brazil. The synergy between family farming and school meals programs strengthens local production in the country. CREDIT: Mario Osava/IPS

In Brazil, the recognition and clear definition of family farming benefited from good statistics from IBGE, a factor absent in many countries.

But studies on the subject and the proposals of researchers taken up by the government face hurdles, due to “ideological issues and the antagonism with agribusiness which has worn the issue down,” lamented Guanziroli.

“The idea was to clearly define family farming in order to promote projects and policies, such as credit,” he explained. It is an activity that is part of the agricultural business, integrated into the marketing chain, and inputs.

In spite of everything, the researcher assesses the balance of the last 30 years as positive. “Family farming has been consolidated, it has irreversible policies giving it a solid structure,” he said.

The best example is the National Program for the Strengthening of Family Agriculture (Pronaf), created in 1995, which continues to guarantee credits with low interest rates and favorable payment conditions. Not even the current far-right government, hostile to peasant farmers, has dared to abolish the program.

What is most lacking is technical assistance, “which never reached family farmers in those 30 years. We tried a thousand formulas, old institutions, non-governmental organizations, but we were unable to mobilize agronomists,” said Guanziroli. 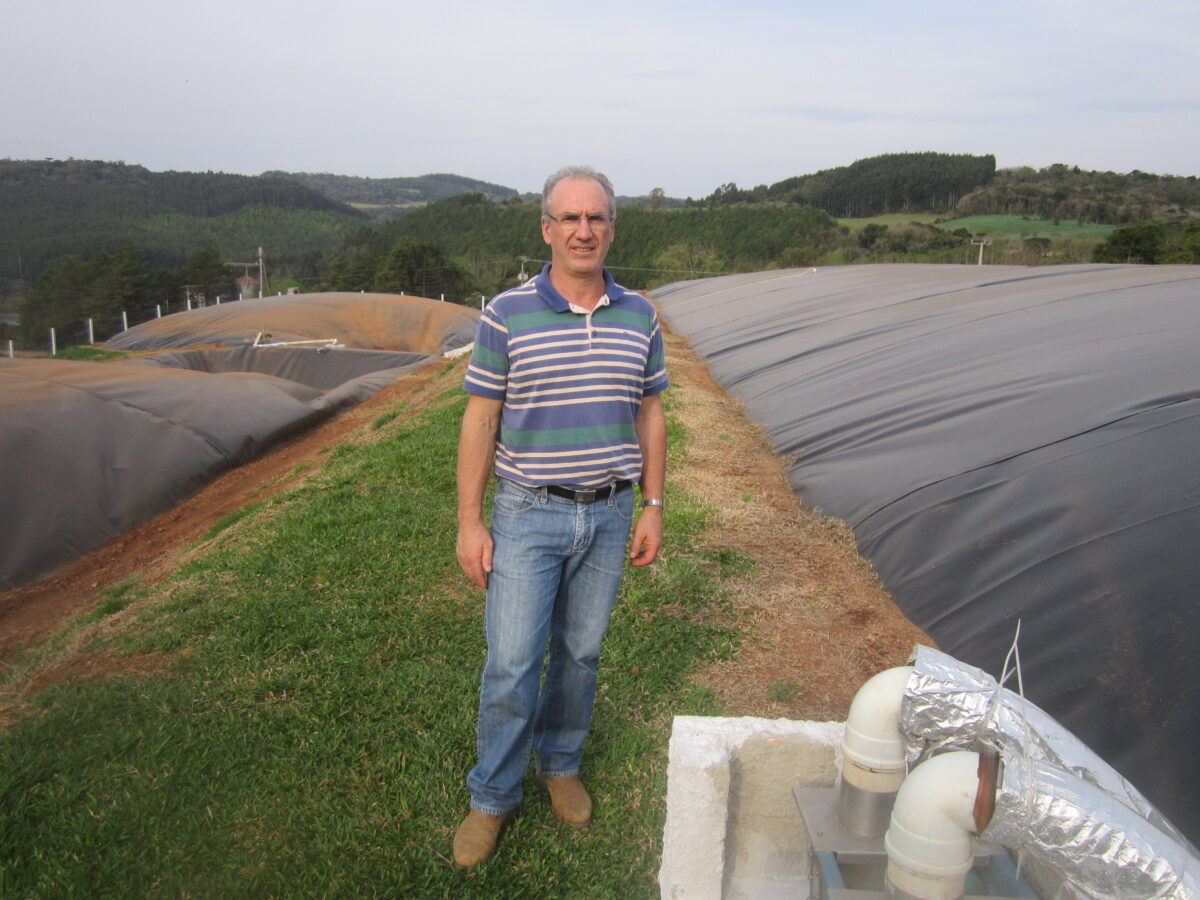 Pig farmer Anelio Tomazzoni stands among biodigesters that converts the manure from his 38,000 hogs into biogas, in the southern state of Santa Catarina, Brazil’s main pork exporter. Energy production is a new aspect of agriculture and livestock farming in Brazil. CREDIT: Mario Osava/IPS

Interest, he believes that Brazil’s competitiveness lies in agriculture. “In industry we fell behind, it is difficult to compete with Asia,” he said. Some services, such as digital platforms, can be an alternative, but they require a long-term effort in education, in which Brazil is lagging.

But Cagnin told IPS from São Paulo that “Resuming Brazil’s economic and social development does not seem possible without progress in industry, following the example of other countries, especially the more complex ones.”

It is the sector that “generates and disseminates the most innovations in a capitalist economy, the one that builds bridges between other activities, adds value to agricultural or mineral products and promotes more sophisticated services,” he argued.

The economist, who specializes in industrial development, recognizes that Brazil’s political conflicts and educational shortcomings hinder progress in the midst of “technological transformations,” productive reorganization and new labor relations.

But industry is also indispensable because of the numerous serious risks facing the “agriculture of the future,” such as the climate crisis, changes in consumption and the directions that the large Chinese market will take, he maintained.

Everything points to the wisdom of not limiting the economy to a few export products, as Brazil is doing, and to seeking “synergies between industry and agriculture,” instead of excluding other sectors, he argued.