Don Tozer and Andrea Lindus, Stockman and Cowbelle of the year. 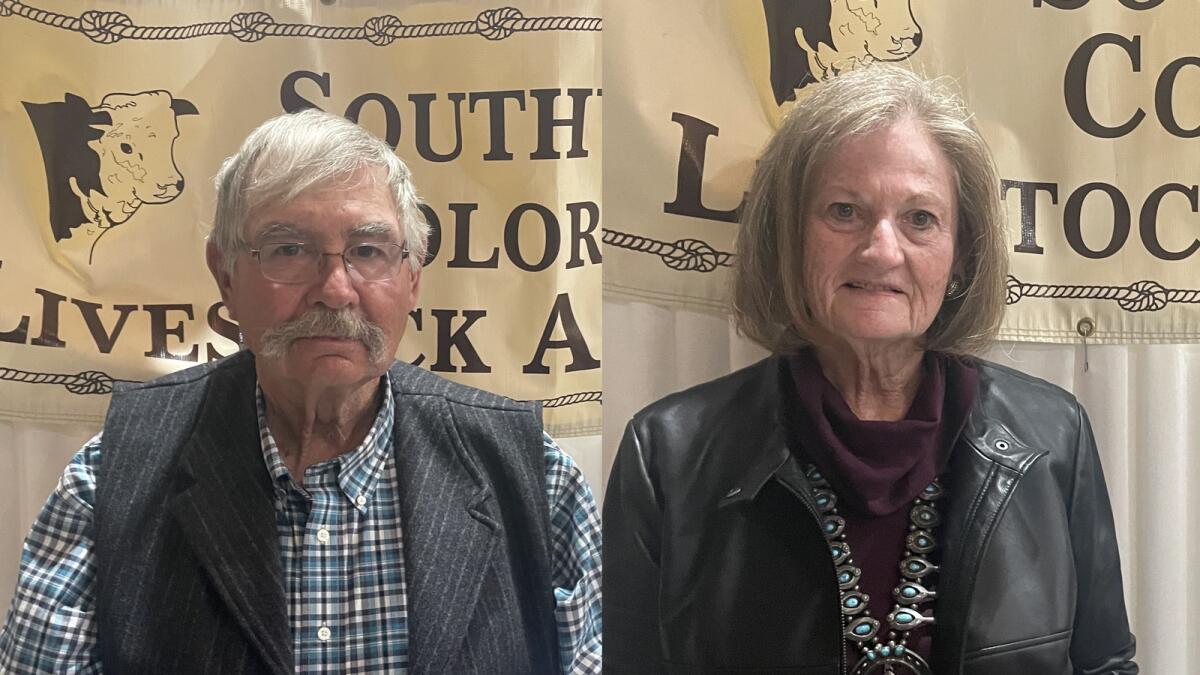 Andrea Lindus and Don Tozer were selected as the 2022 Cowbelle and Stockman of the year at the annual Southwestern Colorado Livestock Association banquet.

The award announcements, tinged with several rounds of applause, followed a live auction, which was preceded by a steak dinner and a day of reports from county officials, state legislators, the Bureau of Land Management, the US Forest Service and the SWCLA.

Vanishing Breed played music to round out the night.

Andea Lindus was selected as 2022 Cowbelle of the Year.

Ranching has been woven into Lindus’ family since the 1800s, and her family still has land in Missouri, where some of her earliest memories took place. She remembers picking cotton and filling a paper sack. She believed she was overpaid when she received a quarter. Another early memory is that of her father returning home from Texas driving Hereford cattle.

Lindus grew up in Arizona, and in the 1980s, she bought a ranch east of Mancos, according to her bio.

For 20 years, she practiced real estate.

Lindus believes that “America’s greatest strength is her ability to feed her people and the world,” her bio says.

Each of her four children helped with ranching operations and participated in 4-H. Three of them still live in the area. Lindus ran cattle on a forest permit in Bayfield.

Although Lindus sold her cattle when her children went to college, her daughter Claire eventually returned to take over ranch operation, and still resides on the ranch with her husband and 2-year-old child raising hay. She uses pink baling twine as a nod to customers that the hay was raised, cut and baled by a woman.

Lindus has served as vice president and secretary of the Southwestern Cowbelles, and has a reputation of delivering tasty treats when needed.

Stockman of the year

Don Tozer was selected as 2022 Stockman of the Year.

Tozer’s been a rancher for as long as he could ride a horse. Many have said he knew what a cow was going to do before the cow knew, according to his bio. Tozer is known for his cattle experience, willingness to share his knowledge and calm demeanor.

In the speech leading up to the announcement, memories of Tozer’s persistence and ingenuity in his craft were shared.

He served in the US Army, and was stationed in Vietnam and later New Mexico, where he fostered relationships with local ranchers. He returned to Montezuma County after being discharged, where he resumed the job he first began as a freshman in high school: driving cattle in Colorado in the summer and in the winter in Utah.

In 1973, he married, and returned to Colorado full-time, where he rode cattle for various owners.

Tozer kept his own small herd of cows.

From 2001 to 2015, he worked for the Ute Mountain Ute Tribe as a cattle supervisor, during which he oversaw the gathering and mitigation of over 300 feral horses. After a brief stint in retirement, he winter calved cattle for the Majors family.

For the past 25 years Tozer has helped organize the Four States Jr. Rodeo.

Two rules Tozer lives by: always leave a gate the way you find it, and when descending a mountain in the late fall “bring everything you can find, you can sort it out when you get off the mountain,” his bio said.

Tozer now enjoys time with his grandchildren – particularly at a rodeo or working with cattle.