After several years of pestering my wife to get backyard chickens, she finally relented this past fall. I made all the traditional arguments: the kids will love them, we’ll have fresh eggs every day, I promise to clean the yard and the coop, no it won’t smell, trust me — and on and on. I would overtly send her photos of cool chicken coops hoping that one day she’d like one and magically say ‘yes’ to my request. Alas, this went on for about five years and the arguments were always the same. We have no room in the yard. They will indeed smell. Who’s going to clean up after them? You are too busy. Yadda yadda yadda.

But I was unwilling to lose this war of attrition. My plan was to convince the kids that it would be a good thing for us and that they could pick out the chicks. Last October I was able to get the family down to Portage Bay Grange in Seattle’s University District and home of all things backyard chicken and more. After showing my family the freshly hatched chicks, I knew I had won. I mean, who can resist a fluffy little chick?

So, we brought three home with all the required accoutrements and set up shop in the basement. After naming them, we cared for them like they were the young dragons in Game of Thrones.

About three weeks later, I convinced everyone that we should get a couple more – so we did. We were on the chicken bandwagon and there was no turning back. However, we have learned a few key things along this journey that must be shared with anyone that isn’t familiar with raising backyard chickens. Read this before you take the plunge and be warned – it’s all fun and games until a dog eats one of your chickens.

I should have known better than to attempt to build a chicken coop without a plan. I had dreams of creating an affordable coop using scrap wood and old wine cases for siding that could be wheeled around the yard as needed. $500 and about 60 hours of labor later – I have built a battleship. Yes, it’s pretty, but completely overbuilt and inefficient. The wheels sit on my porch, unable to bear the weight of the massive amounts of lumber and nails that went into this bad boy.

Lesson learned. Saltbox Designs in the Ballard neighborhood of Seattle creates beautiful chicken coops (among other things) at an affordable price. Go there and save yourself the time and frustration of realizing you are likely not adept at carpentry or building anything.

Get to Know Your Local Chicken Expert

The aforementioned Portage Bay Grange has been a salvation for my backyard chicken endeavors. The owner, Kevin Scott-Vandenberge, and his crew have given helpful advice at all times and have invaluable knowledge. Before you burn countless hours diagnosing chicken problems by browsing fowl message boards, find a local poultry purveyor and be done with it.

At Least One of Your Chickens Will Die a Horrible Death

We have experienced this unfortunate occurrence not once, but three times. It happened in December when the chicks were about eight to ten weeks old. Our family was watching a horrible little dog named Ichigo while her parents were away in Japan. It was a Shiba Inu which is known for: ferreting out and killing small game, running away and being generally evil. 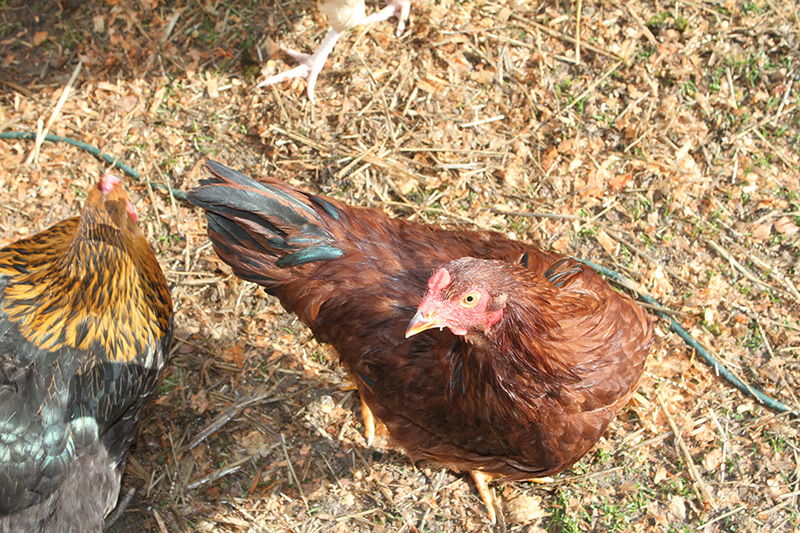 I came to snuff this rooster.

Unfortunately we experienced all of these traits during her stay. One fine day I left the area where the chicks were being kept and the little bugger got in there and killed three of them in a matter of minutes – proudly laying one at the feet of my three year old son. She also decided to escape and run away about five times over a three week span. Unfortunately, we found her each time – more out of guilt than desire as we didn’t want her to disappear on our watch.

This incident did beget the purchase of more, older pullets and the owner of the evil dog was gracious enough to compensate us for our financial loss but not our mental anguish. Yes, we anguished the loss of our dearly departed backyard chickens.

You May Get a Rooster in the Bunch

We knew that chicken sexing is only a 90 percent proposition when we got our flock. We were also over-confident (and hopeful) that we would not get a rooster in our bunch for it is both illegal to have them within the city limits in Seattle and annoying as hell. I’ve spent many a vacation around the world being awoken at absurdly early hours by the neighbor’s rooster. They are my nemesis.

For weeks we happily raised our flock until one day, my wife pointed out that she thought the Rhode Island Red named Scarlett was a rooster. I scoffed at the notion until a couple of days later when I heard the beginnings of a nascent cock-a-doodle-doo at about 5:30 am Over the next few days he perfected this party trick and was aptly re-named Scarleto. I asked my wife and children if they’d like to join me in eating him but I was overruled and he was sent back to the farm — where he was likely eaten by the farmer.

Your Chickens Will Not Lay Eggs When You Think They Should

Getting fresh eggs from the flock takes patience.

I did my research on this. I even created a spreadsheet and highlighted the chicken breeds that should be laying early between 17 to 26 weeks. I bought those breeds. But I’ll be damned if three of our six backyard chickens didn’t lay until after 26 weeks had passed. One has yet to lay a single egg and is now at the ripe old age of 34.29 weeks old as of this posting. I have started to plant the seeds of her becoming dinner but once again have been rebuffed by the family. Perhaps if I send them all away on a trip and enjoy her all for myself? She’s a Cuckoo Maran and I definitely feel that a French chicken would make a divine coq au vin.

But I digress. There seems to be no rhyme or reason when backyard chickens will decide to lay eggs. They may lay every day for a month, then take a break for a few days, then lay every other day. Make sure they have a good, whole grain food with at least 17% protein, water them often, and keep the light on until you go to bed. Hopefully that’ll do the trick.

Has your kid ever had a nagging set of symptoms that you simply could not diagnose? Have you ever spent hours perusing the internet to try and figure out what’s wrong with them? Well, prepare to do the same with your chickens. I swear, there must be as many ‘chicken boards’ as there are child rearing advice boards. You will spend time on sites like The Chicken Chick, Backyard Poultry Magazine, Backyard Chickens.com, Oh Lardy’s Backyard Chicken Series and Pam’s Backyard Chickens. Problem is – your chickens can’t talk and every possible disease carries with it the real risk of death and/or epidemic for your entire flock. 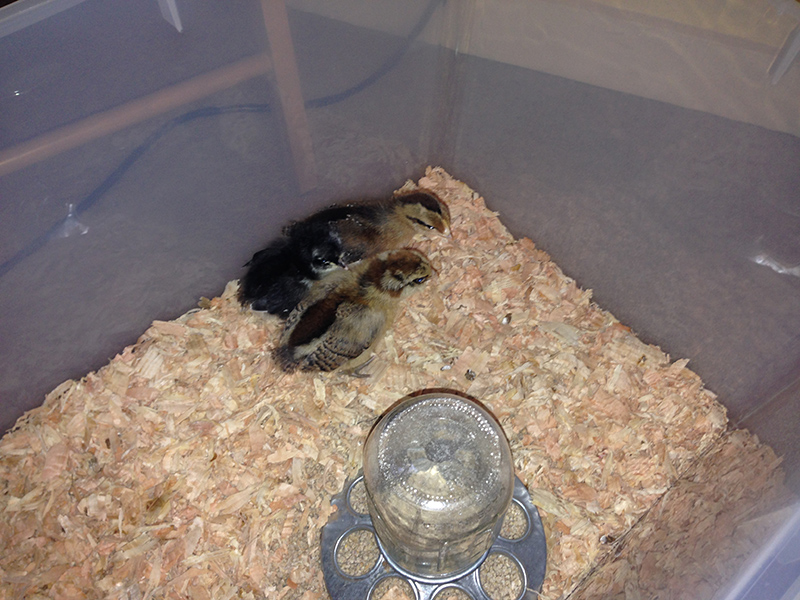 You will spend hours reading, asking for and getting random advice from strangers on what to do with your chickens. It’s mayhem. If a chicken seems very sick or feeble and you can’t figure out what’s wrong then I’d suggest cutting your losses and breaking out the ax. You just might save the rest of your flock with this quick cure-all remedy.

Chickens Can Be Dirty and Smelly

And I don’t mean like your feet after wearing sweaty socks and old sneakers all day. I mean – they smell. They poop everywhere and it accumulates like all get out. Yes, you can throw down more straw and even some diatomaceous earth (DE) to keep the odor down but those are band-aids. Oh, and then there are the flies that come to the party. 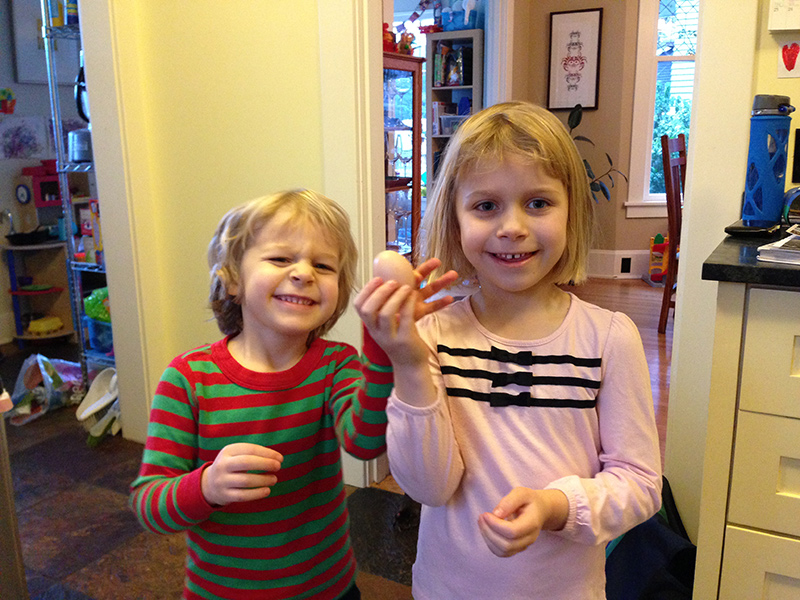 My backyard now consists of two fly traps (that like dead fish), 100 square feet of straw about three or four inches deep, and twice a week sprinklings of DE This helps but the only true solution is cleaning and replacing your straw weekly. Buying expensive products like Dookashi which may or may not help to solve the problem. And don’t even get me started on the joys of cleaning the chicken coop…

Chickens Can Feed You

To me, this is the number one reason to get backyard chickens. The eggs are supremely good. The yolks are bright yellow and they stand up nicely. Having a basket of fresh eggs on the counter to draw from is a lovely experience. The colors of the shells are beautiful and picking them up, warm from the brooder, is the most positive sign of freshness one can imagine. Eating fresh eggs is a sublime culinary adventure. For this reason alone you should get your own chickens.

I never thought I would say this but I like watching my chickens play together. They are funny and each of them have different ‘personalities’. They chase each other, push each other around, fly up in the air a few feet and drop down, roll in the dirt, scratch and peck, etc. Sitting on the porch and looking at them makes me happy for some reason. Maybe it reminds me of simpler times, or lets me daydream about living on a farm – I don’t know. Either way, I like it. 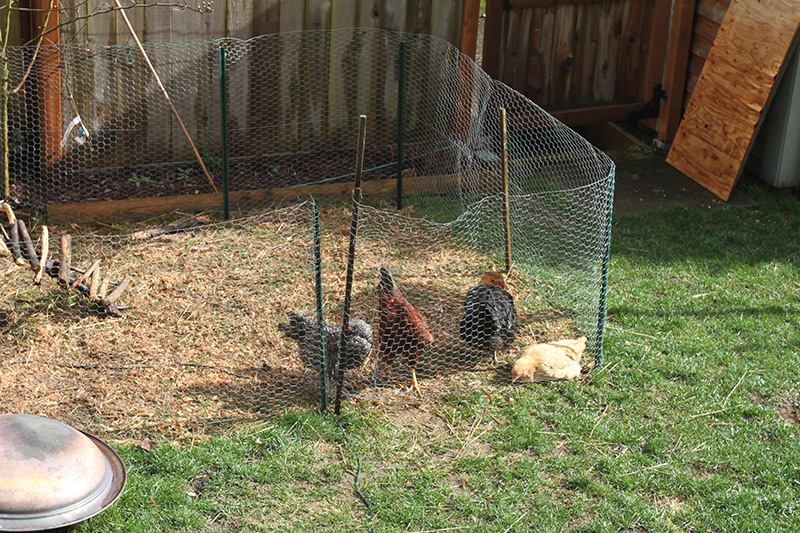 The backyard chicken gang hanging out.

I’ve alluded to this before in jest but now I’ll be serious. Hens have around two good years of laying before their production declines and they become freeloaders. When the cost of feed is greater than the money you save in eggs then you have a little mental cost-benefit analysis to complete. On a true farm, animals that are no longer useful are disposed of (eaten). Since you are a gentleman farmer you can make a far more subjective decision that includes things like love for your birds and the value you place on them as pets. That said, they are pretty tasty little morsels and stewed chicken and dumplings are pretty damned good. Plus, you can experience the whole process all over again by buying new chicks to replace that old hen! Whatever you decide, no one will judge you for it.

Birds of a Feather…

Altogether, we’ve now amassed a half dozen chickens that live in our backyard and who happily cluck away all day while producing a variety of lovely colored eggs that taste delicious. In order to get to those six surviving chickens we’ve had to replace the three that were killed by the evil dog and the rooster we sent back to the farm. Oh, and there was another little chick who didn’t make it due to some undiagnosed problem. So all in all we’ve bought 11 chickens of various age/breed/size/color to get to our current half dozen. While the road was rocky along the way we have learned a lot in the process. Hopefully this will help you as you contemplate beginning your own backyard chicken adventure!

Jason Price lives in Seattle, WA with his wife and children. He’s currently pursuing opening an artisan meat company and writes about food, farming, chef life and eating locally. Check him out at TheHungryDogBlog.com, where this article was originally posted.