Picassent irrigation community distributes and manages irrigation water for over 387 hectares of crops to more than 900 users, mostly growing citrus and palm trees. Water is taken from the Tous dam through the Júcar-Turia canal, a large waterway that delivers water for irrigation and municipal use in the Valencia region of Spain.

Water issues
While the water is very suitable for irrigation, it comes with a high organic load given it is a surface water. Abundant sunlight and low water flow in the dam create a very suitable environment for algae, zebra mussels, and other organisms. This creates a continuous need for maintenance of water installations, including filtration stations, pumps, pipes, and drip lines. This is a recurring cost for the irrigation community and its users, as much of the maintenance process requires manual involvement. It also causes frequent backwash of the filters, resulting in water losses, and additional energy spending in water pumping due to the higher resistance to water flow. Users of the irrigation community see a negative impact of the high organic content in terms of crop productivity, caused by non-uniform irrigation and high levels of pathogens in the water.

Overview of HPGen installation at the irrigation head

Sustainable water treatment with HPGen
HPGen systems generate a safe concentration of Peroxide UltraPure, a very high purity solution of hydrogen peroxide. Peroxide UltraPure is injected into the irrigation system, where it oxidizes organics and prevents their further growth. This advanced form of water treatment keeps the filters, pumps, and other components clean for the irrigation community, and protects the crops and drip lines for its users.

At Picassent irrigation community, an HPGen system was installed at one of the filtration stations, delivering up to 1200 m3 of water per day. The filtration station has two main filters, with two separate sets of piping and users. To properly compare the impact and benefits of the HPGen system, only one of the filters was dosed with Peroxide UltraPure, while the other one was left without filtration. Dosing was done with a designated pump, which introduced peroxide before the filters in a continuous manner together with irrigation water. The filters were compared after 120 days of starting the injection, during which clear differences appeared between the section with dosing and that without. 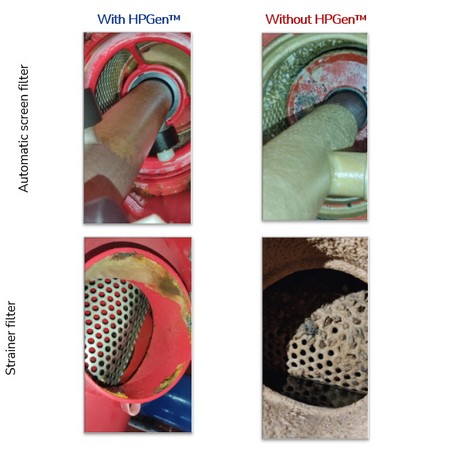 Cleaner filters and drippers
Firstly, the filters at the treated section appeared much cleaner, without traces of organic matter. This includes algae, as well as zebra mussels, which were not present at the section that received Peroxide UltraPure dosing. This means that the need for maintenance on the filtration system is heavily reduced, and the effects of zebra mussel colonies growing in the water system are mitigated. 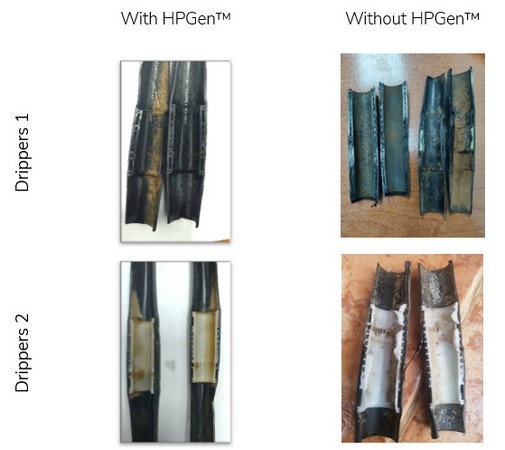 No more zebra mussels
Zebra mussels have been plaging the irrigation community for a long time. The aquatic animal has been an invasive species in Europe for centuries, negatively impacting both ecosystems and agricultural communities. Combatting the zebra mussels has mostly been focused on controlling strategies, as they are difficult to eliminate entirely once established. The complete disappearance of zebra mussel colonies after application of the HPGen system is a hopeful sign not only for the Picassent irrigation community, but also for the broader struggle against this invasive species. 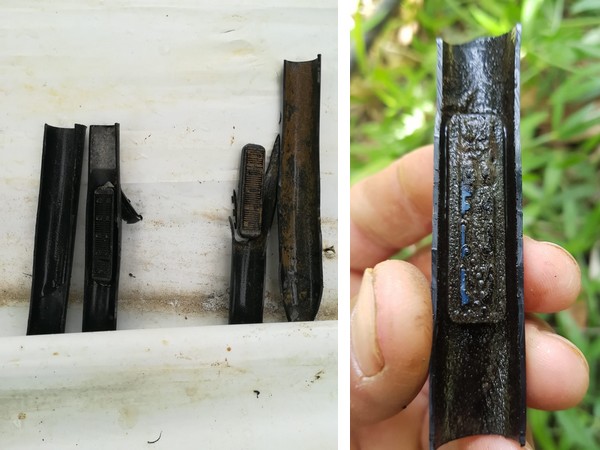 Healthier crops
Peroxide UltraPure not only had a positive effect on the filters. Growers belonging to the irrigation community also noticed a visible impact in their fields. Drippers and irrigation lines started flowing much more uniformly, which resulted in more vigorous, healthier crops.