Tattersalls: action kicks off on Thursday

The two-day Tattersalls February Sale gets under way on Thursday from 11am and will offer plenty of variety for buyers, including yearlings, two-year-olds, horses in training and broodmares. Also taking place on Thursday, before the sale in the parade ring, is the Thoroughbred Breeders’ Association’s Flat stallion parade. Here we take a look at some of the lots to follow over the course of the two days, with emphasis on the diversity available.

Barton Sales offers the sole yearling by Lanwades Stud sire Sea The Moon at the sale, a chestnut colt (96) out of the well-related winner Come Touch The Sun.

The Fusaichi Pegasus mare has produced two winners from four runners. She is out of an unraced sister to Irish 1,000 Guineas Trial winner Kamarinskaya in the shape of the influential Butterfly Cove.

Butterfly Cove is the dam of Prix Marcel Boussac winner Ballydoyle, the stakes-winning Group 3-placed Twirl and, most significantly, champion two-year-old filly Misty For Me, in turn the dam of multiple Group 1 winners Roly Poly and US Navy Flag, the latter now ensconced at Coolmore and who has his first runners this term.

The trimming of Shadwell’s worldwide operation in the wake of Hamdan Al Maktoum’s death last year continues at this sale, and there are a number of two-year-olds on offer that in different circumstances would most likely not have been.

One such individual is the New England Stud-consigned Sea The Stars colt out of the high-class Teofilo mare Tarfasha (80). The April-born bay is out of a dam who won the Blandford Stakes and was also second to fellow Shadwell filly Taghrooda in the Oaks at Epsom. 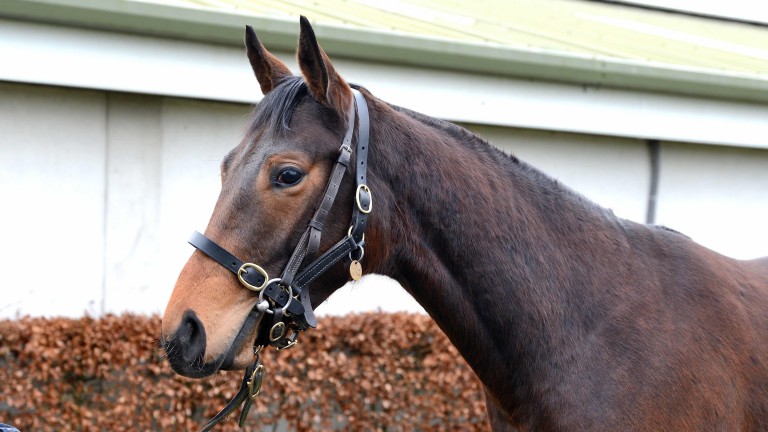 The 11-year-old has produced a brother to this lot in Rakan, who struck in the Listed King George V Cup for the Dermot Weld yard, as well as another black-type performer in Dubawi colt Wuqood, who was a close second in the Eyrefield takes for the same connections.

The horse in training

Darwell Lion (354) arrives at Park Paddocks in a rich vein of form, having recorded a personal best at Lingfield late last month for David O’Meara.

The son of The Last Lion won on his sole start at two for Elllmarie Holden, before being switched to O’Meara’s yard after two further runs without success for Holden.

Now four, the Michael O’Mahony-bred colt won on his first start for the North Yorkshire-based trainer in a Class 4 handicap at Wolverhampton in December and two close thirds were by a three-and-a-half length strike at followed Linfield.

A lightly raced and progressive sort, Darwell Lion is a half-brother to last season’s unbeaten Anglesey Stakes winner Beauty Inspire. He looks a tempting proposition for any buyer seeking an improving performer on the track.

Another consigned by Barton Sales, Realism (116) is a young mare with a promising future. She has a three-year-old Lope De Vega colt in training and youngsters by Frankel and Too Darn Hot waiting in the wings.

Placed twice in the US during a short career for the Bill Mott barn, the daughter of First Defense is a half-sister to the multiple Grade 1 winner Emollient – dam of the Group 2-placed Peace Charter and the exciting Raclette – as well as the Grade 1-placed Hofburg and the stakes-winning Courtier.

Realism has been covered by Make Believe, while the pedigree could be further enhanced by the likes of Deauville and Chantilly winner Raclette, who is on the Classic trail this year for Juddmonte and Andre Fabre.

The unbeaten White Marlin (375Aheadlines four wildcards for the sale and the dual-winning son of the late Mastercraftsman should have plenty of admirers as he takes to the sales ring in Newmarket.

Wildcard entry White Marlin is all set for the #TattsFebruary Sale at the end of this week.@JosephOBrien2‘s unbeaten ½-brother to Gr.1 winner Romantic Proposal has won both his starts, earning a @Timeform rating of 93p for his most recent victory at Dundalk.

Consigned by Ronald Rauscher on behalf of Joseph O’Brien, White Marlin was a head winner of a maiden at Dundalk in December and followed up in a handicap there in the middle of last month.

The gelding has an attractive pedigree too, being a half-brother to last season’s Flying Five winner Romantic Proposal, while their dam is a winning half-sister to the prolific Group 1 winner Toylsome.