What’s in your shed this week? He delves into the highs and lows of Herefordshire contractor Martin Desborough’s machinery.

How did you start?

I was always mad at tractors as a kid, so when I turned 16 I did my test and bought the 674 International, which I drove everywhere.

After college, I started working for a local contractor and saved up enough cash to buy a Massey Ferguson 590 and McConnel PA 93 hedgecutter.

This tractor was terrible, but it allowed me to start doing the hedging of my contract along with my full time job.

Two years later, I was approached by a local farmer who wanted some help growing a property he had seized. This allowed me to buy a decent tractor and go out on my own.

How loyal are you to the brand?

I have always owned Massey Ferguson tractors, and one of the main reasons is that I have a good dealer – JJ Farm Services near Cheltenham.

When I lost the Massey franchise and took over Kubota, I almost made the switch. The only reason I didn’t is that they don’t build a tractor big enough.

Having said that, I am happy with the 7720 we are now running. The Sisu engines run well, are well balanced, and the stepless transmission is great to use.

They might be called the poor man’s vendetta, but I prefer them a lot.

As for the other machines, I settled on Tramspread for most of my navel kit, Lely for feed carts (although the next machine would be in Fendt colors) and McConnel for fence trains.

That would be Frank Alveti, near Ludlow. He is our local McConnell dealer and provides great service.

He and the boys know machines from the inside out and are always on hand to get us out of trouble – nothing really bothers us too much.

I get a lot of my Agco gear from the RVW Pugh now and they are fine, but it is unfortunate that some of the smaller outfits have lost their perks. I think the manufacturers are shortsightedly pushing these huge corporate dealers.

I have a few contenders, but the McConnell 8085T Bulk Header Twincut fence cutter is probably on top. 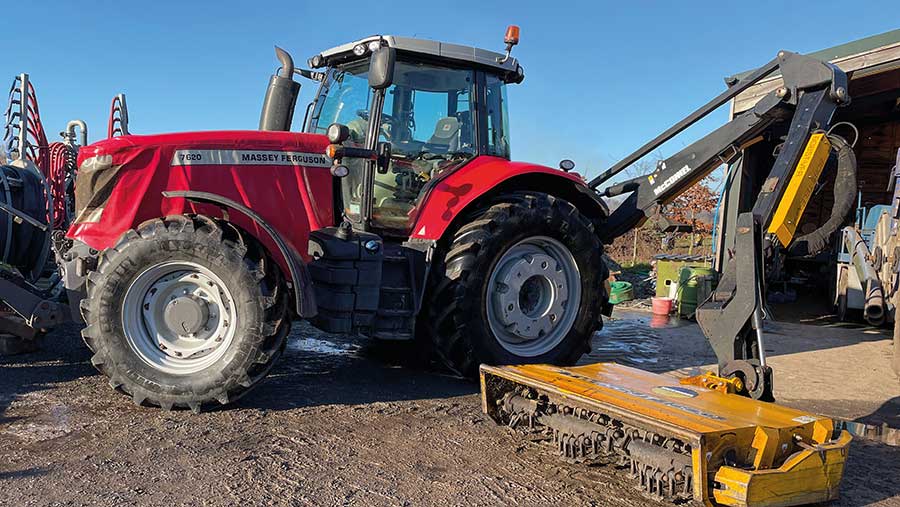 When there is a year’s growth, I can cut the top of the hedge in one aisle, instead of the two I have to do with a conventional head.

But the real benefit is when I cut back two years of growth. The front rotor rotates downward to pull the material in and the rear rotor rotates upwards to give a clean cut.

In addition to allowing me to take off more with each pass, it coats debris and gives a tidy finish.

The razor itself is a little bigger than I’d like—ideally, I’d have a 6585T—but it was the only decent second hand model at the time, so I picked it up.

I got a friend of mine, Dave Rea, a brilliant agronomist, to cut the lever by 800mm so we could fit the head close to the tractor for cutting narrow trails.

It costs more to run than a traditional razor and I charge my clients more as a result. However, because I get the job done faster, their bills end up the same.

I love all the machines I own now. I’ve owned a big, two-axle NC transmission for a while that I couldn’t quite get right, but it ended up being a bargain.

I just bought a 12m dribbling bar with dual Vogelsang accelerators and variable geometry, which is a huge step up from the fixed 8m model we were using before. 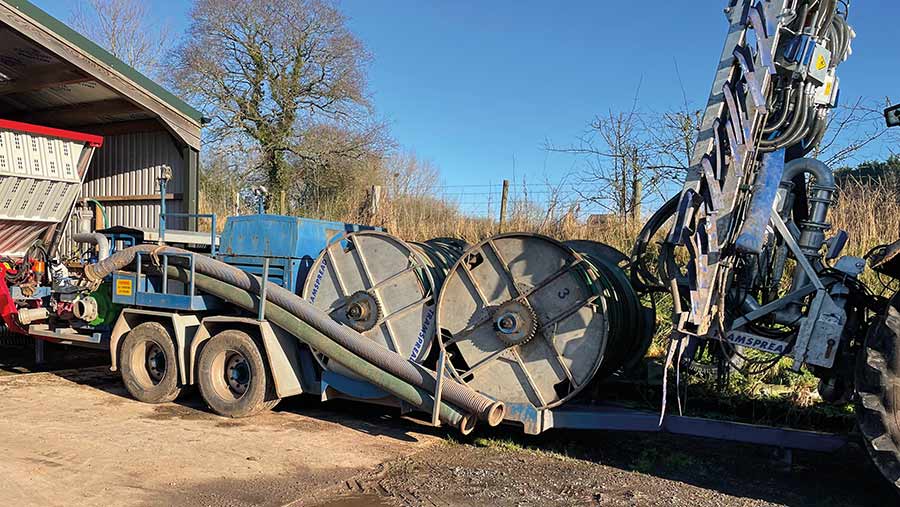 We’re working on some steep slopes, and the adjustable geometry means we can keep the boom level and prevent overdosing on the underside — and it’s surprising how much of a difference it makes.

All of my fence posts were smashed with a 2002 Parmiter hammer, which does everything I need to. Some modifications were made along the way, such as installing a larger counterweight and adding a hydraulic stem.

How long do you keep your machines?

Generally, I will run tractors up to 5000 or 6000 hours before I trade them. You can’t get away from the fact that it costs a lot per hour to run, but that seems like a reasonable point to change at.

I try to make each hour as profitable as possible, which is why I have machines like the Twincut hedgecutter and the Tramspread Remote Pumping Tramspread.

Both the time and trailer savings have the added advantage of allowing me to pump the mud on my own without putting hours on a second tractor.

I would like a second Lely Tigo PR60 feed cart to replace my 2003 Veenhuis VMR Combi.

It was a solid second machine, but the chopping quality isn’t as good as the Lely’s and it’s starting to show its age.

Since Lely is now owned by Agco, the new device should come in Fendt colors. I tried to order it with the Massey brand, but they wouldn’t get it.

I was loading top slurry from a lake into my old Conor 2600 conveyors and the loading area got wet from the over spill a bit.

When I left, the wheels slid over a rim and the tanker flipped on its side, and its contents returned to the lake.

Fortunately, his rotating drawbar prevented him from pulling the tractor, too. We were able to get him back on his wheels and finish the job, albeit with a big flat out in the front of the tank.

There was a long battle with the insurance company, but in the end I got reasonable compensation for it.

It seemed like a bargain at the time, but not long after that, the Dyna-4 transmission started to cause trouble.

At first, we thought the shuttle was at fault, but when we split the tractor and got into the gearbox, there were all sorts of problems.

We’ve done a lot of work ourselves, but the bill is still around £9,000. We kept the tractor for another two years and sold it 8000 hours, so it traded itself a bit.

I came up with an idea to adapt a 15ft Mixit lagoon stirrer motor so that it could be used to mix slurries in above-ground tanks.

This involved building a frame, complete with a hydraulic power port and three-point linkage, that slips onto a pair of telescopic handling forks.

The Mixit motor is connected to this and the motor is powered by telescopic handling hydraulics.

It can reach most stores and the angle can be adjusted simply by crowding out the processor headstock.

Martin Desborough’s best invention – a transformer that allows the 15-foot stirrer to be used in above-ground tanks. © James Andrews

It’s not as fast as the dedicated turret stirrer, but it does the job well enough. I can’t take credit for building it – that goes back to my friend, Dave Rhea.

I also devised a simple way to convert a McConnel 6500T logging tool to fit a three-point link.

I wanted to use it as a second trimmer so it needed to be easy to turn on and off, plus I could save some cash by not having to go out of the pivot brackets. 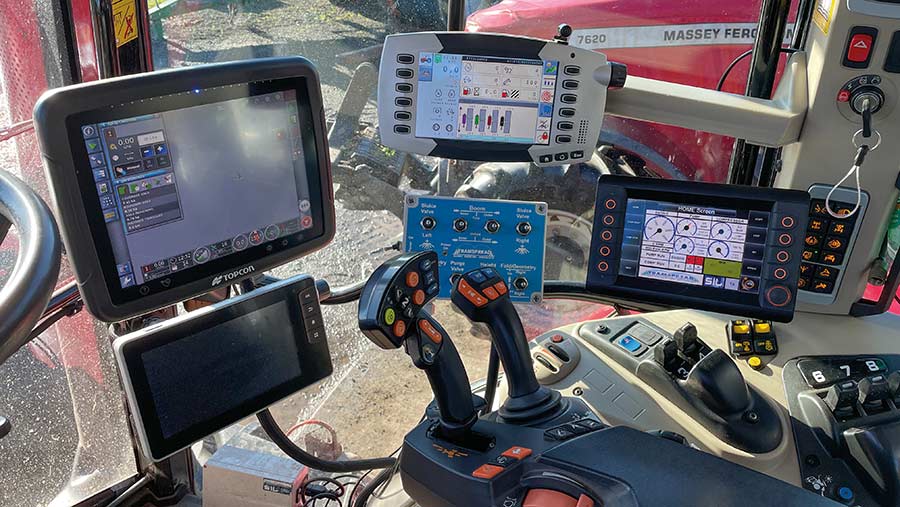 Remote mud pump controls are installed in the tractor cab, meaning one person can manage the entire job © James Andrews

What can’t you live without in the workshop?

I have a large double cylinder compressor, which we rotated around the workshop with a blue water tube. It keeps the floor space free and it’s easy to get different points that we can connect to.

The pressure washer is great too. It is a simple hot water model from Cleanwell, which has excellent flow and expels slime and sludge from equipment with ease. It is much better than the cheap cold water model we had before.

I love all the jobs we do, but using a feed cart has an advantage – it’s a great time of year and a great change from slurry pumping.

Paperwork is least preferred, followed by the misery of repairing a leaky slurry tube.

What is your daily mode of transportation?

It did 134,000 miles and was reliable, but I needed to do some welding on the chassis to get it through the last MOT.

The worst thing is the amount of fuel he uses. As a result, I’m very fond of my 1996 1.3 Diesel Fiesta van, which costs nearly nothing to run and doesn’t cause a problem.

Are you buying used?

Your best tractor ever?

I had a new 7480 in 2012 and it was great. It was my first CVT tractor, had all the tools—power pulleys, front linkage, transmission—and I really enjoyed driving it.

It was a bit flat on the forage wagon, so I reset it to 181 horsepower at the AP and flew. I logged 5500 hassle free hours with it before selling it.

I saw it was on sale recently with over 8000 hours clock.

Old Massey Ferguson 590. The driving was horrible, the steering was so awful that I had to fight to keep it on the road, and he had problems.

The International 674 I had before was twice the tractor, although the noise in the cab was deafening.

I purchased a 3000 gallon dual axle NC conveyor with 6m saliva tape over the phone and thought I was going to get a whole lot of gear. However, it was something impractical and the inside was alarmingly rusty.

I ended up keeping his saliva tape and sold the tanker for £300 less than I paid for it, so it wasn’t too bad in the end.